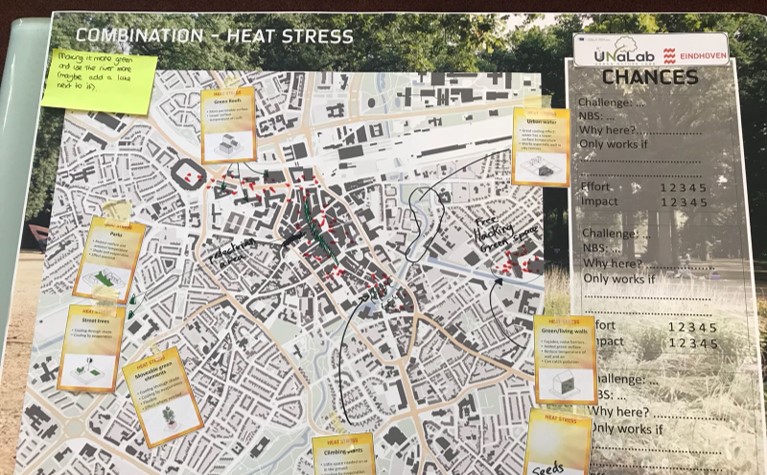 The OpenLivingLab Days (OLLD) is the annual gathering of the global Living Lab community. It offers a space for public officials, companies, entrepreneurs, academics and innovators to connect and work together to create new products and services, to set the basis for debate and exploration of theories, and to discuss and process policy recommendations within the practical elements of open and user-driven innovation.

This year’s edition of the OLLD took place in August in Geneva, Switzerland, and was focusing on the role of citizens, open innovation and the potential of Living Labs in the context of the 2030 Agenda for Sustainable Development.

Our UNaLab front-runner city Eindhoven participated in the conference by hosting a co-creation workshop on the application of nature-based solutions (NBS), using the inner city of Eindhoven as the testing ground. The objective of the workshop was to share the city’s knowledge on the implementation of NBS and to let participants experiment with different types of NBS. In addition, it was a way for Eindhoven to discover new innovative ideas to optimise their ‘Inspiration Book’ of NBS measures.

So why call the workshop ‘The Game of Nature-based Solutions’? In the workshop, the participants were playing with actual cases from the city of Eindhoven and thinking about possible solutions to these cases. This way, the participants could elaborate on where, what, how, why, and when to implement NBS in an actual context. They did not only learn how NBS work in a real case, but also what the process of implementation looks like.

To play this game, the participants were given sets of playing cards with descriptions of nature-based solutions and three boards. One group focused on the challenge of heat stress and the other on flood management. The only theoretical introduction to NBS was provided through a short, animated movie produced by the UNaLab project. In the first round, the participants were asked to introduce themselves, to rate their knowledge of NBS by using a scale from 1-5, and to give an example of an NBS. This offered an easy and comfortable way to start the conversation. The next step was to use the playing cards to create a mind map of NBS.

In the second round, maps of the city centre were provided together with some questions to help the participants to get to know the specific background and details of the areas in Eindhoven that struggle with heat stress and flooding. The participants then combined the facts that they had discovered in the third and final round, by putting the NBS cards on the maps of Eindhoven where they considered that a specific NBS should be implemented to tackle the challenges that the area is fighting.

At the end of the workshop, the two groups presented their work and shared their impressions of this short experimental game. The feedback was very positive. The workshop gave the participants a solid idea of what NBS are about and provided the possibility to discuss and share information in an easy way. The workshop also proved to be beneficial for the city of Eindhoven. The city received some new suggestions for NBS, some ideas on new combinations of solutions, as well as suggestions on how to develop them further in scale or space. After listening to the feedback from the participants, Eindhoven could conclude that they are heading in the right direction with their NBS.