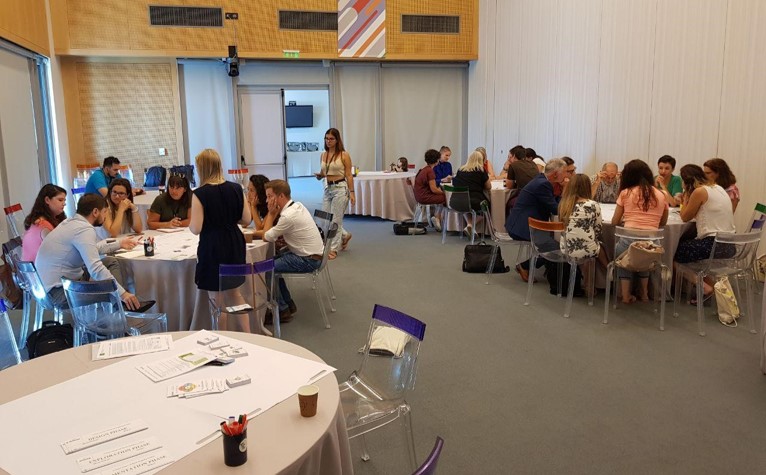 In order to obtain a better understanding of urban living labs from the perspective of UNaLab city representatives and to define the concept of an urban living lab, two workshops were organised in the UNaLab project, followed by an open-ended questionnaire to validate the collected data in the two workshops. The first workshop was held in front-runner city Genova, Italy, with seven UNaLab project partners to deepen the participants' knowledge and understanding of the urban living lab concept, while at the same time gathering information on the topic and capture their perspective as the city representative by reflecting on the key components of an urban living lab. Following this approach enabled us to refine the initial list of key components and add or remove other key components that are applicable in urban living lab context. This workshop involved 35 participants with representatives from both UNaLab front-runner and follower cities and lasted for approximately 60 minutes. In the first workshop, general discussion around the tables was captured on post-it notes posted on the templates. At the end of the workshop, the main outcomes per each table were shared in a short debriefing by the participants.

The aim of the second workshop, carried out in follower city Basaksehir, Turkey, was to validate the results obtained in the previous workshop, as well as to exchange knowledge on urban living labs and to gain a rich picture of the current situation of the cities by reflecting on the refined key components of an urban living lab. In this workshop, we were also interested in knowing in what phase of lab development the cities were in and how to proceed with setting up and running a living lab in their own cities. Seven participants from both front-runner as well as follower cities attended the workshop and it lasted approximately 80 minutes. In this workshop, general discussions around three tables was captured on templates aiming to support the set-up of an urban living lab. At the end of the workshop, a feedback form was distributed to the participants, who reflected on the main learning outcome of the session as well as the next step of developing the urban living lab framework from their perspective. When analysing the results from the second workshop, confusion about the concept of urban living labs appeared, hence, an open-ended questionnaire was distributed to the UNaLab front-runner and following cities with the aim of gaining more insights into how the concept of the urban living lab was understood and implemented (or planned to be implemented) in the front-runner cities.

In order to make this framework more useful for the UNaLab cities, an urban living lab RoadMapping toolkit was developed. The first prototype of this toolkit was tested at the OpenLivingLab Days 2019 in Thessaloniki, Greece, in early September 2019. In this workshop, we followed an interactive knowledge sharing approach across mixed groups of participants (Living Lab experts, Managers, etc) that enabled us to have creative conversations around different tables, by means of seven sets of cards to develop the road map, plan and timeline for an urban living lab.

The session began by an introduction to the urban living lab framework and its key components, followed by a discussion around different tables (8 persons per table) to develop the road map for their own urban living lab by using sets of cards representing the key components of an urban living lab (i.e., governance and management structure, financing models, urban context, nature-based solutions, partners and citizens, methods and finally ICT-infrastructure). Empty cards were also be available in all categories when necessary. The workshop ended by sharing insights of the different tables with the rest of the participants and reflecting on the results from all tables.

The urban living lab RoadMapping toolkit is now being refined and improved based on the received feedback from the OpenLivingLab Days workshop, and the final version of the toolkit will be presented in the next UNaLab consortium meeting in Castellon in late November 2019.

(1) For further reading, see the article Urban Living Labs: Towards an Integrated Understanding of their Key Components: https://timreview.ca/article/1224