At the turn of the third decade of the 21st century, we find ourselves and our ideas living and thriving in a digital world. Today, making an impact and influencing decisions is made easier thanks to the various digital tools and software. In UNaLab, we strive to develop digital tools that help municipalities, cities and citizens influence the ways climate adaptation is approached in their cities. In this series of UNaLab ICT tools stories, we talk about the ICT tools developed and tested in UNaLab for supporting the implementation of nature-based solutions (NBS) in any city throughout and beyond the project duration at each stage, from co-creation to NBS monitoring. Each story will present a single UNaLab ICT tool and discuss its place in the adaptive management cycle* (or, Plan-Do-Check-Act cycle) of NBS implementation.

FACILITATING THE DIALOGUE BETWEEN CITIZENS AND MUNICIPALITIES

The first tool we want to introduce is the Open Nature Innovation Arena (ONIA). ONIA is the UNaLab digital tool providing the collaboration environment where citizens and municipalities collectively discuss and identify issues or concerns affecting the quality of life in the city and co-define the possible solutions to solve these problems.

ONIA was developed primarily for facilitating the dialogue between citizens, including Urban Living Lab (ULL) participants, and municipalities as targeted feedback and ideas from citizens and stakeholders are the potential drivers for the local changes. ONIA can therefore also be used to support and facilitate ULL activities in cities. While ONIA is primarily a problem definition and co-ideation tool aiming at bridging the citizens and the municipality, it also contributes to the later stages of NBS implementation by providing space for feedback. ONIA provides space for collaboration and a transparent voting system, where everyone has a chance to generate ideas and improve them. Its place in the adaptive management can be summarised as: 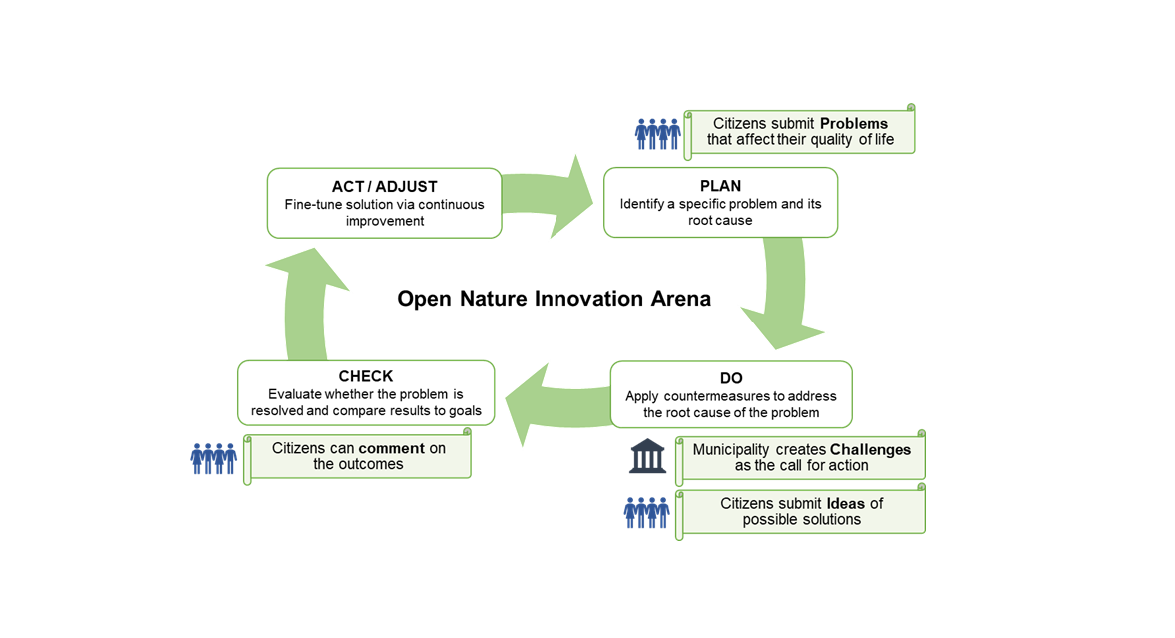 All of these characteristics made ONIA a valid tool for facilitating and coordinating the co-creation activities in the Urban Living Labs in the UNaLab front-runner cities: Genova, Tampere and Eindhoven. Moreover, as part of the Digital Enabler - the digital transformation platform owned by ENGINEERING - ONIA is also being used in Living Labs in several European cities such as Antwerp, Trento and Helsinki.

HOW DOES ONIA WORK IN PRACTICE?

Citizens, including Living Lab participants, can use ONIA to address a specific issue that affects their quality of life in the city by submitting a problem, in order to raise awareness of the issue among the local community and bring it to the attention of the municipality. This increases the possibility of the issue being picked up by the municipality and actions being undertaken to solve it.

After evaluating the submitted problem, the municipality can issue a call for ideas to the public on how to solve the problem by creating a challenge in ONIA. The municipality can utilise several resources to provide a clearer picture of the problem to the citizens, such as socio-economic reports or air quality data provided by the UNaLab City Performance Monitor tool, and add these to his published challenge in ONIA.

Citizens can now identify and develop possible solutions that could solve the challenge published in ONIA. When they have found a solution that they think will work, they can submit this idea in ONIA as a response to the published challenge. Once the deadline has expired, the municipality can together with selected experts go though and evaluate the submitted ideas. ONIA allows for the entire process to be open and transparent, as the icons under each submitted challenge, problem or idea indicate in which phase the process is. The feedback and evaluation of the ideas are also published in the tool, and the citizens can themselves vote and comment on the different submitted ideas, challenges and problems.

During the following co-development phase, all involved parties implement the selected solution together, while in the co-monitoring phase, which starts once the solution is operative in its real environment, all citizens can monitor the effectiveness of the solution and its long-term impact. If a problem is encountered in one of these phases, the municipality has to consider restarting the co-creation process by updating the challenge assessment and co-defining a different solution.

*Adaptive management cycle, or Plan-Do-Check-Act cycle, is an interactive process involving a series of actions aimed at continuous development and robust decision-making.