Development and co-creation of Nature-based solutions (NBS) as innovative approaches are characterized by several barriers. In this page these barriers are introduced and an structural model showing the interdependencies among these barriers is presented

The barriers to the uptake and co-creation of NBS have been collected from several workshops and interviews conducted in the course of the project and an extensive literature review. These barriers are:

Lack of political will and long-term commitment

Lack of sense of urgency among policy-makers

Although awareness of the importance of green practises has been increasing, there is hardly any sense of urgency regarding the need to apply NBS (Garza-Reyes, 2015). A low sense of urgency among political decision-makers regarding NBS can be a barrier for mainstreaming NBS in the (e.g. municipal) policy agenda: “An inadequate event-based risk perception is widespread, and it results in the sense of security that denies any sense of urgency among policymakers” (Clar et al., 2013, p. 5). In many cases, politicians are, therefore, not aware of the full potential of NBS in addressing pressing societal challenges, such as climate change in urban areas (Hawxwell et al., 2019).

Lack of public awareness and support

It is not only the lack of urgency among policy-makers but also a limited public awareness and negative perception of the community toward NBS tend to impede the NBS development process (Wamsler et al., 2020). A key element of any NBS development process thus is to co-create solutions with citizens by including them in the early stages of the planning process (Kabisch et al., 2016). In many cases, however, the need for NBS is ignored by the public (Lorenzoni et al., 2007). In addition, a lack of support from local business representatives can also act as a barrier to the uptake of NBS. The engagement of local entrepreneurs and other members of the local community appears to be critical in effectively developing and maintaining NBS (van Ham & Klimmek, 2017).

Risk aversion and resistance to change

The literature reviewed suggests that the implementation and maintenance of NBS is usually the responsibility of the municipality, which is also responsible for the safety and well-being of the citizens. As such, city planners and engineers who develop and implement plans, especially in case of major challenges like storm-water management, prefer to develop actions with rather certain outcomes. They often have a fear of failure to use NBS (Dhakal & Chevalier, 2017; Kronenberg, 2015) that may involve uncertain (long-term) outcomes. This risk aversion is also a barrier for organizations in the private sector to adopt NBS, as they are mainly concerned about the possible financial losses, which results in resistance to change and the preference to use gray (traditional) infrastructures instead of NBS (Davies & Lafortezza, 2019; Kabisch et al., 2016).

Siloed thinking is frequently mentioned in the literature as a critical barrier for successful uptake and implementation of NBS (Clar et al., 2013; Lorena Pasquini & Cowling, 2015). Different departments and institutions operate on the basis of distinct visions, goals, legal structures and ways of thinking; in other words, they are stuck in their silos (O’Donnell et al., 2018). This is a critical challenge in developing NBS as multifunctional solutions that cut across multiple disciplines and institutions (Davis & Naumann, 2017; Frantzeskaki et al., 2017). For example, green areas can provide water storage and infiltration services; however, in order to design and implement these services, green area planners and sewage and water planners should collaborate to realize the multifunctionality of this NBS (Primmer & Furman, 2012).

Adoption, implementation and maintenance of NBS usually require long-term planning, which conflicts with the short-termism of many municipal administrations. In many cities, this short-termism has become firmly integrated into the administrative culture, which needs to be removed for the successful uptake of NBS (Burch, 2010). For instance, the responsibility for the maintenance and monitoring of NBS often remains unspecified, which poses huge risks to the long-term realization of multiple benefits (Kabisch et al., 2016).

Any conflicts between municipal, regional and national policies and regulations can significantly hamper widespread implementation of NBS (C. Li et al., 2019). Moreover, regulations are often not regularly updated in view of the development of ecosystem-based approaches like NBS (Olorunkiya et al., 2012; Primmer & Furman, 2012). More specifically, the regulatory problems give rise to conflicting mandates among different departments and similar conflicts (Brown & Farrelly, 2007). Other examples are inconsistencies between urban planning and municipal regulations (URBAN GreenUP, 2018).

Lack of design standards and guidelines for maintenance and monitoring

This barrier concerns the uncertainties regarding the best way to plan, design, implement, maintain, and monitor NBS. In this respect, design standards and guidelines for maintaining and monitoring NBS tailored to the local conditions of different cities are currently missing. These guidelines are essential to effectively respond to context-specific challenges arising from a city’s resources and its institutional and socio-cultural characteristics (Zuniga-Teran et al., 2019). The acknowledgement and appreciation of the local conditions are essential in the development of monitoring and assessment guidelines, which has made the provision of commonly acceptable monitoring frameworks an ongoing challenge (Schmalzbauer, 2018).

There is a need to give more weight to NBS studies (Davies & Lafortezza, 2019; Johns, 2019), in order to provide professionals in the field with the required knowledge for planning, designing, implementing, maintaining and monitoring NBS. Besides, the absence of transboundary actors skilled in speaking the language of different groups, and connecting stakeholders at different institutional levels is a critical barrier (Sarabi et al., 2019). These actors can come from different departments or institutions, to play the role of knowledge brokers and facilitate networking among scientists and policy-makers (Clar et al., 2013). Additionally, educational and training programs are mostly dedicated to traditional (instead of NBS) solutions (Davies & Lafortezza, 2019). As a result, there is a critical need for knowledge brokers and educational programs which bring stakeholders together to network and co-create NBS.

Lack of information regarding the benefits of NBS appears to be a key barrier in the uptake of these solutions (Sarabi et al., 2019). NBS, as a relatively new approach that deals with complex socio-ecological systems, are characterized by multiple uncertainties (Kabisch et al., 2016). The knowledge base about NBS has thus far mostly remained academic in nature (Davis & Naumann, 2017) and the information and evidence regarding their functionality and benefits are scattered (Nesshöver et al., 2017). There is limited knowledge available for helping cities to recognize ecosystem (dis)services provided by NBS, and to find the best practices (Ruangpan et al., 2020). The main selling point of NBS, in comparison to conventional solutions, is their multi-functionality. However, there is no adequate evidence (yet) to demonstrate the multiple benefits of NBS (Short et al., 2019). Besides, there are few studies of the benefits of NBS in different climate conditions, which has limited the uptake of these solutions (Debele et al., 2019).

Although there are several studies showing that NBS is often cheaper than gray solutions (H. Li et al., 2017), a common perception is that the implementation and especially maintenance of NBS solutions involve more costs compared to a gray infrastructure (Fernandes et al., 2019; Lorenzoni et al., 2007). However, there are cases in which the perceived benefits outweigh the perceived costs; an example is the ‘room for river’ program (Ruangpan et al., 2020). In any case, the perception of high costs can be a barrier to the adoption of these solutions (Dhakal & Chevalier, 2017), especially among private owners (Tsantopoulos et al., 2018).

As Droste et al. (2017) mentioned, municipal revenue systems have limited options to invest in NBS and green infrastructures. Municipal revenues of many cities are mostly dedicated to social expenditures as well as the development and maintenance of gray infrastructures, and there are not many financial opportunities to invest in innovative approaches like NBS. Besides, citizens and entrepreneurs are less willing to invest in NBS, as they see it as the responsibility of local government, which further limits the funding options for NBS (Parr et al., 2016). ​​​​​​​

There is also a lack of financial incentives to encourage the implementation of NBS (C. Li et al., 2019), which is an important barrier when the public sector, entrepreneurs and citizens (e.g. as private owners of houses and real estate) need to collaborate in developing NBS. The multiple benefits of NBS are often not clear for citizens and entrepreneurs, that is, they are not certain about ‘what is in it for me’; the latter kind of certainty requires the provision of incentives like cost-sharing or tax reductions for owners and developers (Dhakal & Chevalier, 2017; Fee et al., 2009). In this respect, many citizens and entrepreneurs are not yet ready to accept the economic valuation of NBS or similar solutions (Zuniga-Teran et al., 2019). Besides, the lack of appropriate business models has limited the adoption of and investment in these solutions by external financing bodies. Strengthening the ‘business case’ for NBS is therefore critical for successful public-private partnerships (Davis & Naumann, 2017).​​​​​​​

The lack of adequate suitable locations is another challenge for the implementation of NBS in urban areas (O’Donnell et al., 2017). The suitability of any locations for NBS implementation can be restricted by many factors, such as the slope of the roofs or territory, size of the sites (e.g. narrow streets or sidewalks), type of the soil, contaminations in the soil, or underground facilities like water pipes and electricity lines which can be an obstacle for planting trees (Miccio, 2010; URBAN GreenUP, 2018).

Strcutural Model of the barriers 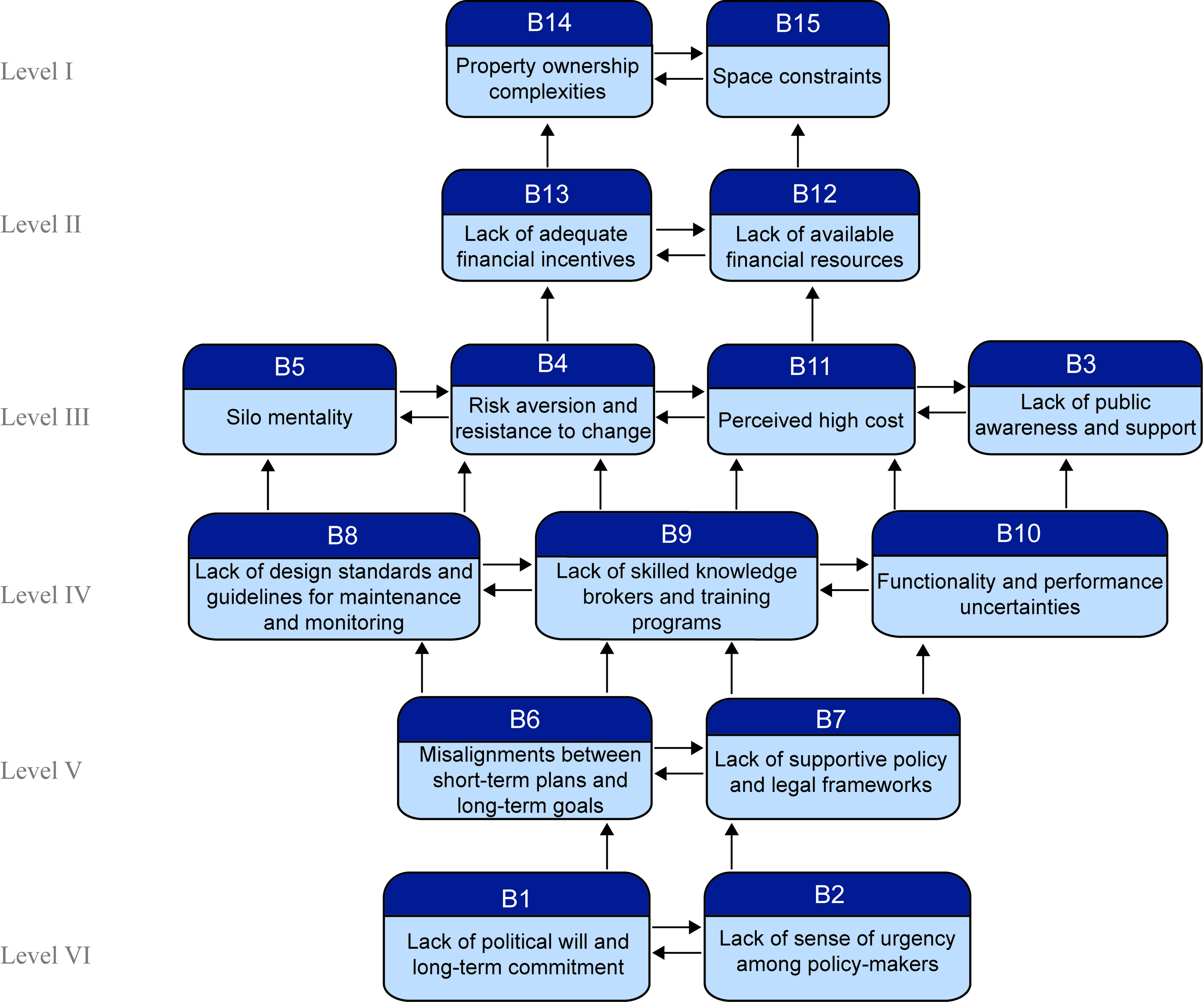